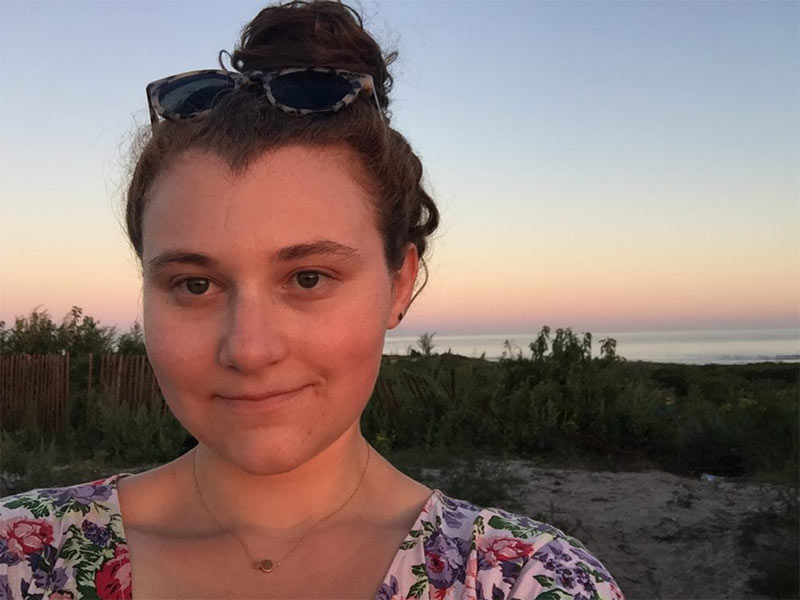 Philadelphia is full of young people finding creative and gratifying ways to give back to their communities. Spruce is proud to use this little corner of our newsletter to highlight some of the best and busiest young philanthropists in the city!

We were lucky enough to sit down with Lily Applebaum, a 27-year-old who works at literary arts center Kelly Writers House. Lily moved to Philadelphia in 2008 to go to college and decided to stick around after graduation, in part because she felt she wanted to get to know the city even better, culturally and socially. “It just feels like you can find your place here,” she says. She also loved the size of the city, which allows her to feel ownership and investment while also keeping her on her toes: “It’s big enough that there are still parts of it I’m exploring and learning about, but small enough that I see people I know all the time.”

When she’s not at work, Lily can usually be found baking, gardening, attending Kate Bush dance parties—or serving as an assistant in an immersive English for Speakers of Other Languages (ESOL) class for adults at the Aquinas Center in South Philadelphia. She found out about the opportunity when her friend, who taught the class, posted on Facebook that she was looking for volunteers. Lily had already had some experience tutoring ESL in high school, and when she learned about the opportunity, it felt serendipitous—she was spending more and more time in the neighborhood where the Aquinas Center was located, and it was important to her to give back to the people she was spending time around.

The class does help its students master grammar and reading comprehension, and seeing students make progress is gratifying. But one of the things Lily finds most rewarding about volunteer teaching is that the class is student-centered and collaborative. “We really try to teach the content that students want to know,” she says. This past summer, some students had expressed interest in learning about Philadelphia history—so Lily and the other teachers organized a unit that explored the rich immigration history of the very neighborhood in which the class was taking place.

Her students come from many countries of origin—Vietnam, Cambodia, Mexico, Indonesia—and they live just blocks from the historic Italian Market, a neighborhood populated largely with the descendants of Italian and Irish immigrants. “I do see some pushback from certain families who immigrated much longer ago,” Lily admits. “A full mastery of English will help [our students] have an even bigger voice against those forces. It’s important to focus on a student-led way to give them the tools they need to fight for their place in this city.”

Teaching isn’t the only thing Lily does in the way of community service, though. Some of her other pursuits require her to get her hands a little dirtier. She’s a volunteer grave gardener at the Woodlands, a 54-acre historical site in West Philadelphia whose ample green space encloses a 19th-century cemetery. Many of the graves are “cradle graves”—built with a tub shape in front of the headstone and meant to be treated as plots to be gardened—that have been neglected for decades. But volunteer grave gardeners beautify the ground by “adopting” a neglected grave and revivifying it by tending to Victorian-era plants. Lily finds it gratifying not just to watch flowers bloom, but also to invest in beautifying the park and, ultimately, to make it more inviting for community members and neighbors who may not know that they’re allowed to explore the grounds. “I get to be a steward of the space and get involved in its care and continuing growth,” she says.

Lily has a number of causes she always supports financially: immigrant rights and environmental justice, to be sure, as well as reproductive health access and LGBTQ youth support. But she also feels it’s important to help break down the barriers that people—especially young people—feel around giving donations. So a few years ago, Lily started organizing small events—brunches and picnics—that she would prepare herself, in or around her own home. At these gatherings, she asks guests to Venmo her $10 or more, and at the end, she donates the proceeds to an organization in need. Last month, she made waffles, and she and her friends were able to donate $200 to Hurricane Harvey relief funds. “You’re bringing everyone together to do something fun, but you can’t help talking about the cause that you’re coming together for, and you’re also creating community,” she says. The events allow her to leverage her own interests and talents to give back to her community in an impactful way: “I find them easy to organize, in a very chill, casual way that people find it easy to get into. And it combines two of my favorite things: bringing my friends together, and feeding them.”

So how does Lily think that young philanthropists can get started? Do some research on the nonprofits and cultural institutions in your area. “Knowing about them is a really good way to understand what’s going on in your neighborhood, and how you can help out,” she says. She says that even keeping yourself aware of the issues you care about helps you lay the groundwork for getting involved. “Philanthropy, to me, is about being connected with the city and even the neighborhood that you live in.”