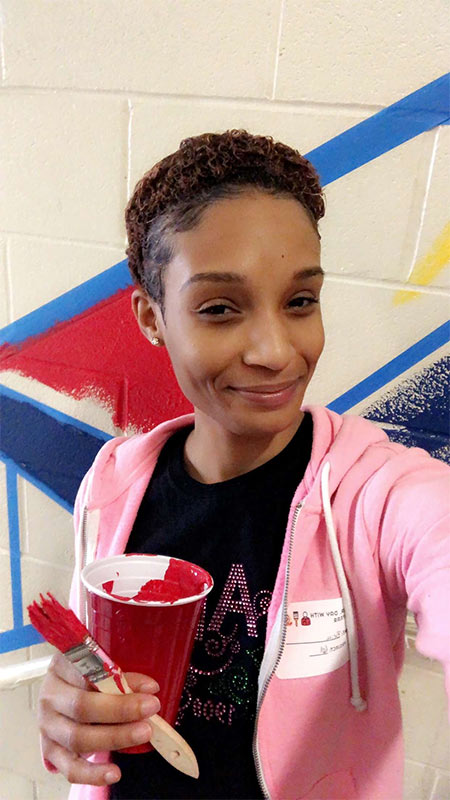 MLK Day of Service is one of the most impactful days of the year in Philly. Citizens volunteer to help refurb schools by painting them, refurbing them, and making small projects like bookshelves. According to their website, MLK day of Service in Philly has completed over 1,800 projects, with over 145,000 volunteers, and 500,000 service hours. It’s a big deal. This year, it was held on January 15.

I wanted a bit more information on the day, so Spruce’s fearless leader Eliza put me in touch with Bria Spivey. When I talked to Bria, I found out about the great work that MLK Day of Service is doing, but I also learned that the real service goes much deeper than what happens on that day. There is a lot of work put in on the back end to make things happen; work that is being done by incredibly talented, intelligent, and passionate people making a difference – people like Bria.

Bria spent a year of service in Philly with City Year from 2014 to 2015. City Year is a national organization that believes that education is what helps kids reach their potential. They deploy corps members to 25+ cities to serve in a variety of functions, mainly as school support and support to students. According to Bria, the Philly City Year team was large, but because of how difficult the work can be, some people end their service early – not Bria though.

While the in-school support role of a City Year AmeriCorps member is essential to student success there is a small but mighty team called the Civic Engagement Team or CE Team which plans, coordinates and executes all the major service events. Bria served on this team as the Communications Coordinator where she enlisted volunteers for all major service events, as well as managed all social media postings for her team. Bria also went above and beyond, managing registration on the largest days of service, including MLK Day. She remembered many of the volunteers by their first names – remarkable, considering over 1,000 people registered for that event.

What was her favorite part of her City Year experience? The kids. “Kids are the best part of MLK Day of Service, they are so, so appreciative, and they want to come to school the next day to see all the beautiful work that has been done.” She said that many of the schools selected tend to have walls that haven’t been painted in decades. After City Year comes in, they are vibrant and full of color, full of little details and custom designs. All in all, Bria called her City Year of service, “the best experience of her life.” She participated this year as a volunteer.

Bria is currently working in the office of Innovation Management at the City of Philadelphia as the Digital Inclusion Program Specialist. She started last year. Prior to that, she earned her Master’s Degree in Strategic Communication at American University in Washington, D.C. Bria keeps in contact with a lot of her professors, she is even conducting some research for one of them.

Bria turned her year of service into a life of service. She was able to leverage her deep dedication to Philadelphia, her intelligence, talent, and passion for change into personal success. Philly is lucky to have her.