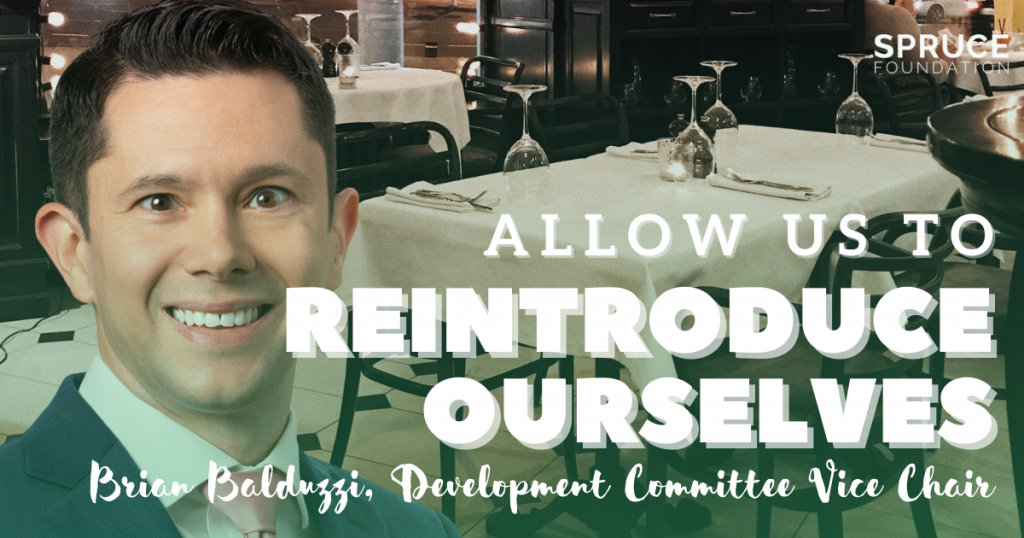 Meet Brian Balduzzi, Vice Chair of our Development Committee, a self-proclaimed foodie, board game lover, and former member of the American Theatre Critics Association which bestows the prestigious Tony Award for Regional Theatre.

What’s your favorite part about living in or near Philly?

Restaurant scene! I am a self-proclaimed foodie and I love trying neighborhood restaurants. I love the diversity of food and the top-notch restaurants in the area, particularly Fiorella’s, Zahav, and Talula’s Garden.

What’s a little-known fact about yourself?

I was a theatre reviewer for 5 years in the Greater Boston area, reviewing 100-150 productions per year. I was also one of the first invited Boston members of the American Theatre Critics Association, which bestows the Tony Award for Regional Theatre.

It’s Saturday night—where can we catch you hanging out?

Board game night at my place!

Which Philly cheesesteak spot is actually the best?

How long have you been involved with the Spruce Foundation? And why did you decide to get involved?

I have been involved for the past three years, starting, first, by attending Spruce Council events and then joining the Board as Vice Chair of Development. I see philanthropy and our role as emerging changemakers in Philadelphia as being vitally important to my social impact and values. I want to empower others to see themselves as being able to join others in collective giving that has a measurable impact on our local community, particularly in serving youth.

What is your committee (or ad-hoc committee) working on right now that you’re most excited about?

Annual Report. I am excited that we can think about how we share our achievements and progress each year with our stakeholders, and how we use this to start conversations related to developing deeper relationships with our donors, members, grantees, and other stakeholders.

What has been your favorite event, initiative, or accomplishment while you’ve been at Spruce?

Dynamic Donor program. Everyone should feel able and empowered to give a personally meaningful amount to local causes that align with their values. Our Dynamic Donor Program empowers all donors to give regularly and often an amount that is meaningful to them, removing barriers to giving such as finding the time to research causes, respond to annual appeals, or build giving into their budget. Who doesn’t like to feel like their $10 per month has a measurable impact on the future of Philly youth?