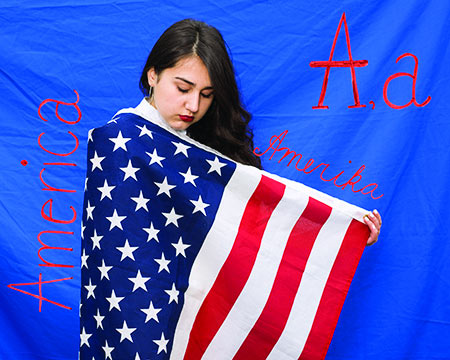 Among the houses of West Philadelphia is a green, blooming garden, the namesake of the West Philly based arts non-profit Al-Bustan (“the garden” in Arabic) Seeds of Culture that presents and teaches Arab culture through the arts and language. It serves as a meeting place, a grove to brainstorm, and part of the home of Al-Bustan’s dynamic Executive Director Hazami Sayed. The garden office extends into a beautiful basement space, filled with books, artifacts, and pieces of art from Philadelphia students Sayed has mentored through the years; and finally, countless miniature pieces of art from the installation I came here to discuss: An Immigrant Alphabet. Below is the interview I had with Hazami Sayed, executive director of Al-Bustan, and Diana Misdary, Al-Bustan’s public art project manager.

Where did the idea of the alphabet come from?
Hazami Sayed: The alphabet idea started with Wendy Ewald, an artist I had started following years before. She had done similar projects involving alphabets and disenfranchised youth as part of a project called American Alphabets.

How did you choose Northeast high school to feature?
HS: Al-Bustan has a longstanding partnership with Northeast High School over the past ten years. As the largest and most ethnically diverse public school in Philadelphia, NEHS has a significant number of students of Arab heritage, including Palestinian-Americans who were born here and immigrants from Iraqi, Syria, and Sudan who came here as refugees. By offering arts-based programming in and out of the school day, we have built relationships with many teachers and students–some of whom we continue to mentor. At the request of the administration, we also supported a Muslim Girls Culture Club–a few of the girls in the club are actually featured in An Immigrant Alphabet.

Was Northeast High administration on board with the project?
HS: Since we were already there during the school day with Al-Bustan teaching artists working with Dr. Jay Fluellen’s class three days per week, the administration and faculty were very accommodating. They allowed us to pull students out of some classes and adjust their schedule during the 4 weeks of Wendy’s residency at the school.

How did you select the students to participate in the alphabet project?
HS: The selection process started out with an application. Part of the application was light criteria around immigration, it had to have impacted their lives in some way. Applicants did not have to be immigrants, though all the students or their parents were immigrants. We asked the students to tell us about themselves. We also asked them why they wanted to participate in the project. We felt it was important to select students who showed a genuine desire to participate, since this would be a time investment for them.

Can you describe some of the other letters and their participants?
Diana Misdary: Doha is an Iraqi who fled her country during the war, living in Syria till she came with her family to America as refugees. She started out in Kentucky, which she found to be much different than Philadelphia. There weren’t any outsiders in Kentucky. When she came to the Northeast, she started out as an ESL student. She was in gen-ed by the time she was a senior, her progression was so remarkable. You can see her in letter T for trust. Rushana is another, who fled her home country Tajikstan as her mother was a journalist critical of the government. After living in Turkey for several years, Rushana and her 3 siblings and mother were able to get refugee status in America. You can see her in the letter L for leave.

Did you face any challenges getting the installation hung?
DM: We had a very smooth, and pleasant experience with the City of Philadelphia in getting this up. The City and the Mayor’s Office have been very receptive to the installation, they even put some of our previous student artwork from our camps and workshops in the foyer of the mayor’s office.

Were there any other locations considered?
DM: We were considering 30th Street Station for a brief time, then Andrew Stober of University City District suggested we look at the Municipal Services Building. We approached the Director of Public Art Margot Berg at the Office of Arts, Culture, and the Creative Economy who responded quickly with interest and enthusiasm, enabling us to do this as a temporary public art installation.

What has the response been from the public? What are the conversations you’ve had with onlookers at the installation?
DM: Mostly very positive. I’ve had conversations with people who didn’t realize how much their own lives were impacted by immigration and refugees, and also people who are keenly aware. I had a very meaningful conversation with a descendant of Holocaust survivors about forced assimilation, and about losing who you were before to assimilate here. In 2017, it probably shouldn’t be that way, but that’s the way it’s always been. It has served as a reminder that we need to resist the current political climate.

What is the biggest lesson you have learned from doing this work?
HS: Invest the time in getting to know people. An Immigrant Alphabet installation will be on display at the Municipal Services Building through the end of the year. Join Al-Bustan Seeds of Culture in active participation at the installation, and take the active participation survey on their website. *The interviews with Hazami Sayed and Diana Misdary occurred at separate times, and these answers are condensed for length and clarity.